Ooh, my heart is all gooey and melty. My little boy, 2½, hasn’t taken his new pirate hat off since I finished it for him. Part of that is because I’ve been putting it on him at every available opportunity so I can get a decent picture for the pattern, but mostly it’s because he reckon’s he’s dead cool in it. I’m sure the warmth and softness of the Fyberspates Scrumptious it’s made from isn’t hurting either!

Jake and the Neverland Pirates has been a firm favourite, and some of his first phrases were “ah, coconuts!” and “grab ‘em and go!” (looong emphasis on the “go!”, also accompanied by much running around in circles, fist upraised). Peppa Pig and Ben and Holly have also featured pirates at some point, so it’s no wonder he’s taken with them. 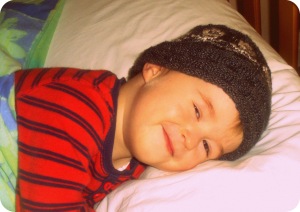 Today as he was cuddling his hat in bed, and he looked up at me and said “Mummy make it? Mummy knit it for me? Sank you, Mummy.” and I just puddled. Love you, baby bear.

One thought on “My Son’s Pirate Hat”